The Royals are reportedly open to signing Eric Hosmer to a long term contract. This is good (I guess) as Hosmer has become a fan favorite. I think it's safe to say if the money is reasonable then Moore should make that deal. If not, however, DM should be prepared to let him walk.

People who love them some RBIs were thrilled to the moon when Hosmer topped 100 last year. It was his breakout year, after all, with a career high in home runs too.

"The sky is the limit," the people cried.

Not so much really. Those numbers looked good, but others, mainly on-base percentage (.328) and slugging percentage (.433), were less impressive. When you start digging deeper into his numbers you really need to hold on tight to those home runs and RBIs, otherwise, you find a guy who is nowhere near worth a hundred million dollars.

I fired up the always trusty Play Index to find similar seasons this century. I found 39 players who had a 25+ home run, 100+ RBI season at age 26 since 2000. I sorted the players by OPS+, and while I expected Hosmer to be near the bottom, I didn't expect him to be at the very bottom. Yet there he was looking up at the other 38 players (including four Royals).

I've never believed Hosmer would sign a long term deal. I still don't really, even with the two sides making eye contact at each other. I would like to see him stick around but not if the price is going to be a burden down the road. A 1 win first baseman with a 101 OPS+ seems like something you would try to upgrade from, not throw all the money at. But here we are.
Posted by Unknown at 10:39 PM
Email ThisBlogThis!Share to TwitterShare to FacebookShare to Pinterest 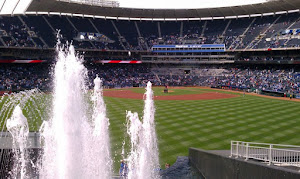